NEWS
​The latest news within our collection

We hope you are all staying safe during these uncertain times.

Unfortunately and understandably the rally calendar has been hugely affected by the current pandemic BUT we are excited to see you all once this is all over!

You will be delighted to read that we are still planning to go ahead with our Bristol RE Running Day on Sunday 1st November 2020 in Winchester however, we are monitoring the governments advice. If our decision changes, we will of course update you.

For now, stay home, stay safe and save lives.

Thank you to all our key workers.

​On Sunday 3rd November, our Royal Blue Bristol RE LDV467F was unveiled at our running day in Winchester.  Followers will know that the coach has been receiving major work to the chassis plus exhaust, brakes and engine work over the past three years.

Resplendent in all over white with a blue band, the coach represents the period after the National Bus Company took control but before 'National' white became the standard livery.

IM Services at Romsey carried out the repaint and including attention to the rusty chrome bumpers. These are now presented in silver and transforms the look of the coach completely. Fleet names and legal lettering were supplied by Greg Taylor and really add to the finish along with NBC style headrest covers.

'We cannot believe how stunning she looks' says Jason and Daniel. 'When the coach went into the paint shop, it was planned to be painted in 'National' white with standard branding however, a last minute change of heart resulted in this livery.  Heather, Daniel and I discussed at length which livery would be best, Daniel preferring the traditional blue/cream livery whilst I wanted NBC standard. In the end, it was Heather's suggestion that got the vote and now here she is'.
Of course, the main work undertaken was out of view and we cannot express enough our appreciation to those who helped along the way.  Family friend and fellow preservationist Richard Sinclair carried out major work on the chassis, built a new exhaust system and overhauled the brakes whilst Mark Webb and Steve Lane helped with work on the compressor, wheels and other bits. Tom Daubney and Ben Rogers carried out some additional mechanical work ahead of the unveiling day and Colin (the Electrician) assisted with a couple of electrical gremlins.  We couldn't of done this without the help, skill and knowledge of these people who we are in the debt.
​
There is still work to do on the interior as it is still very original but usable. 1457 is likely to appear at a few events next year so keep an eye on our 'Rally Diary' for her appearances and others within the collection.

Sunday 3rd November 2019
Today we staged our second Bristol RE 'mini' Running Day and what a day it was.
A nice, relaxed event saw eight examples of the type in service accompanied by a very fine ex London Transport AEC Swift.   Attendees were up on last year and the weather held off to allow visitors to enjoy the buses in the autumn sunshine.  One of the highlights of the day was four Bristol RE's departing Alresford station at 1445 heading off in different directions.

To top the day, we unveiled Royal Blue LDV467F in her new early NBC livery of all over white with a blue band.

A good day was had by all and we will be back next year to do it all again!
We are grateful to all visitors who supported the event by purchasing a souvenir booklet and special thanks to the owners for bringing along their vehicles.  Of course, special mention for our drivers Malcolm, Gerald and Mike for giving up their spare time to help us.
Join us next year in Winchester on Sunday 1st November for our third Bristol RE Running Day.

We are delighted to announce that both HDL 23 and 25E passed their MOT tests on Saturday 23rd of September.

Despite not necessarily requiring MOT's, due to the age of the vehicles, we like to get ours checked every year to ensure everything is as it should be.

This means that both vehicle will be attending and running in service at our mini Bristol RE running day in Winchester on Sunday 3rd of November. More details above.

Many thanks to our good friends at I.M Services in Romsey. 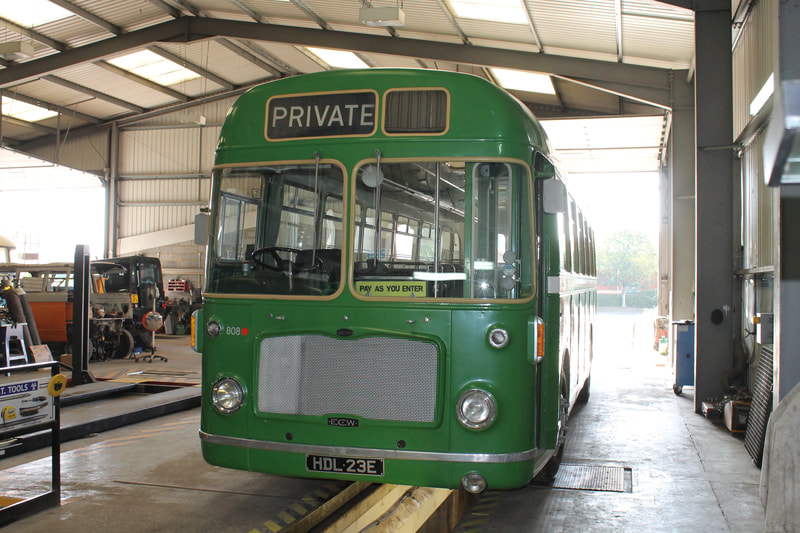 On September 15th Jason and Daniel spent the day with family friend, Thomas, carrying out an MOT prep and engine service on HDL 25E. Also, HDL 23E (owned by Terry Hussey) was dug out from storage in preparation for MOT too. 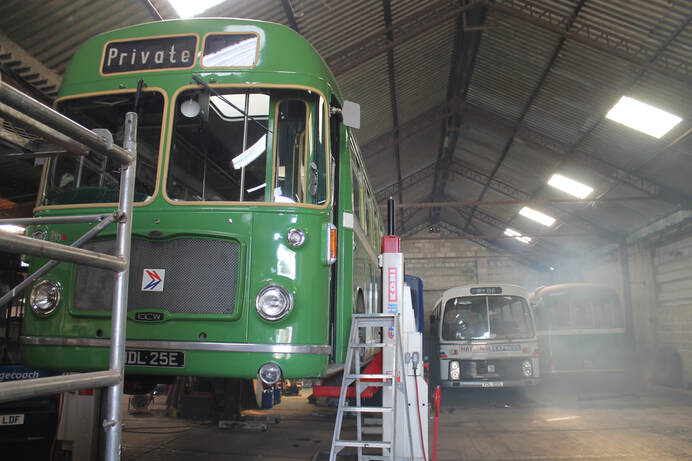 A Southern Vectis reunion in the barn!

Daniel and Jason thrilled to accept the 'Best in Show' award.
On Sunday 4th August, Southdown 583 and 2210 attended Stokes Bay Rally staged by the Provincial Society.

During the morning, the Mayor of Gosport was looking around the exhibits and we got chatting to her about our two buses. Later that morning, we were very surprised to see the Mayor return to the buses accompanied by Provincial Society Chairman, John Sherwin advising us that Southdown 2210 had won 'Best In Show'.
​
We were delighted to accept the award in recognition of all the hard work carried out by us and Richard Sinclair in getting 2210 back to operational condition.

06/08/19
Southdown 583 has been off the road for some time this year whilst we rectified a problem with an air pipe and issues with rubber seals on it's gearbox.

A pipe runs from the compressor to the gearbox however, the union joint had perished with age and leaking badly causing the bus to lose air.  Despite a repair by a local hose repair company, the pipe failed again so after much searching, a replacement was found by Bristol VR enthusiast, Rob Sly.

Rob also kindly supplied new rubber seals for the shaft coming out of the gearbox, a common problem with these buses.  With help from family friend, Tom, 583 is now back on the road and attended the Gosport Bus event.
​
583 is still not quite ready for public use as there is still some minor interior work to be done but hopefully it will be giving public rides soon.

22/07/19
What is affectionately known as the 'Alton Bus Weekend', proved to be another busy weekend for us here.
​
On Saturday, two of our Bristol RE's, Southdown 2210 and Southern Vectis 810 took part in the annual Bristol RE Running Day.  2210 acted as a Control Bus whilst 810 was in active service throughout the day.

On Sunday, Southdown 2210 and 510 drive by Daniel and Jason attended the big bus rally at Anstey Park.  This year however we only had vehicles on display rather than in service but nevertheless both buses drew a lot of interest and kind comments.

11/06/19
On a recent outing with 2210, a small leak was noticed on a pipe that runs from the middle of the bus to the coolant header tank at the front. The pipe runs along the inside of the offside and coolant was found on the floor below a join.

On inspection, the join was badly corroded and the pipe from the join to the header tank fell apart.  This meant that new piping was needed along with unions for both ends. However, at the header tank, it was found that a special union was missing preventing the system from pressurising properly. So things have gone from a simple small leak to a removal and replacement of the defective header tank and various other associated challenges.

In order to access the pipe, we removed the seats along the offside and so the opportunity was taken to rub down and repaint the side skirting and seat frames.

07/06/19
Southdown 510 has undergone some maintenance and preservation work recently.
Visiting Portsmouth, 510 had some welding work carried out on a couple of weak spots identified in an inspection recently. Family friend Simon Davies carried out the work using his many years experience in working with buses from this era. The chassis is now protected and solid for years to come.

In addition, 510 has also received new fuel filters, a fuel tank clean and some repairs to the fuel lines following problems getting fuel into the engine.

Finally, on Saturday 1st June, Daniel took 510 to Romsey for annual MOT testing and we're pleased to report she passed.

A bit of a Southdown theme as 510 receives attention whilst a Leyland PD3 and Titan TD1 look on.

07/04/19
​Bristol RE's PPM210G and LDV467F have been receiving plenty of attention this past couple of weeks.
​
LDV467F is almost ready to be dispatched for painting now that all chassis and engine work is complete. Last weekend, our attention turned to the inside where a good clean is required after three years off the road. Some years ago, Daniel and Richard painted the ceiling with cream paint however the finish was not particularly good. So last weekend, Heather and Daniel worked tirelessly using a combination of bleach, chemical spray and white spirit to remove the paint to reveal the original pattern at the rear of the coach.  In the meantime, Jason removed a damage seat and did some other work.

PPM210G is currently off the road due to more electrical problems and some other minor defects. Over the weekend, friend of the family Colin ( a qualified electrician with many years experience on Bristol vehicles) came to Central Works to help out, Some faults were found in the wiring around the regulator and the alternator was found to have moved and shorting out on part of the engine. After some rectification work, the bus is now charging as it should rather than over-charging and risking a battery explosion.  A water pipe has been replaced internally and new trim fitted however, problems have been found with the header coolant tank which now needs replacing.

See the vehicle pages for further details and images.

On Saturday 16th February​, Heather, Daniel and Jason took Southdown 583 to Romsey for it's annual test.
​We are pleased to advise that she passed and is now fit for another year. ​